Healesville is about as far away as one can get from the bustling metropolises of London, New York, Germany, and Sydney.

For District Nursing Coordinator Ruth however, it may just be the final pit stop on her global nursing odyssey.

“Healesville has bitten me. It's gorgeous; an absolutely beautiful place to be,” comments Ruth.

“I did a home visit the other day. They told me ‘if you see a couple of cows that look like this, turn right, and it's two kilometers down a dirt driveway, then it's up on top of the hill and it's around the corner.’

“Then you eventually get there and they're not in the house! So now you have to go and find them in their shed.”

“We go to some out-of-the-way places and sometimes there's no phone coverage either.

“You see some sites which are a real eye opener.” 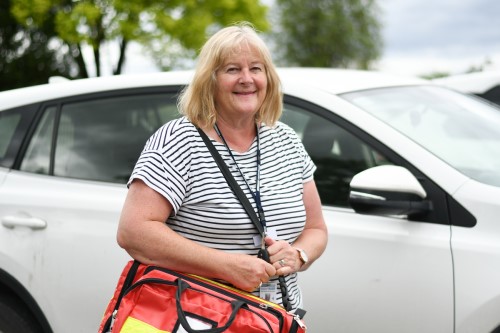 Following in the footsteps of her mother and grandmother, Ruth

started her nursing training in London before using her qualifications as a springboard to travel the world.

“But then I had two wee boys.”

Pulling up stumps in Healesville, the slower pace and tranquil surrounds seem to agree with the District Nurse Coordinator.

“Healesville it is a lovely community,” muses Ruth.

“You often have that shared experience with a lot of the people who live up this way.

“On 41-degree days when there's a strong wind, you notice that everyone's quite on edge (because of the bushfires).

“I recall the day (Black Saturday, 2009) when I went down to give the CFA (Country Fire Association) some icy poles, because it was so hot.

“They were all sitting around, so I dropped some off as I was driving past.

“I said ‘well, it's really quiet, but I don't think it'll stay quiet.’

“And then obviously, all hell broke loose. Those things stay in your mind.”

The constant threat of bushfires and the toll of working on the land breeds resilient citizens that value their sense of community. Unsurprisingly, Ruth’s own sons have developed a strong sense of community service as well; one working with the Fire Service whilst another currently studies Psychology.

As a District Nurse, Ruth understands the challenges of the community better than most as she makes her routine house visits to patients.

“We're very much the frontline of Eastern Health in a way because when they come out of hospital often we're the first people to see them.

“You've got to approach patients in a completely different way, because it's their home, their environment.

“So when you go and see someone at their home, if you think they're running into some sort of problem, you've got to diagnose it and then you've got to make your clinical judgement as to what to do next.

“The buck stops with you.”

Clearly embraced by the community, Ruth acknowledges the support health services staff enjoy from the people she meets on a daily basis.

“I think that we're highly valued within the community as well because you see people out on the street and when you go to the shops, so you are the face of Eastern Health in a lot of ways.”