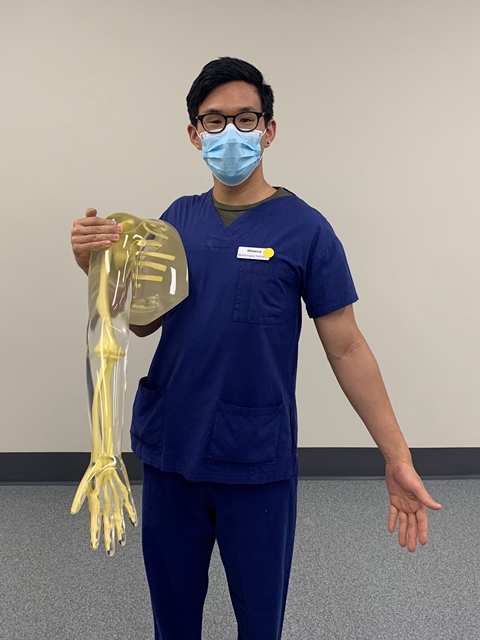 An exciting new research project can now commence in Eastern Health's Medical Imaging department thanks to the arrival of an anthropomorphic phantom kindly funded by the hard working members of the Lions Club of Blackburn.

Anthropomorphic phantoms (pictured being held by Brandon, right) are objects that can be used to simulate the human anatomy.

Anthropomorphic phantoms are invaluable for research as they provide true anatomical detail when x-rayed, but can be subjected to multiple exposures without risk.

"Current standards and practices are based on the premise that any radiation dose, no matter how small, could result in detrimental health effects such as cancer or genetic damage."

As registered users of x-ray (ionising) radiation, Medical Imaging Technologists are mandated to keep the x-ray radiation levels to a minimum using the principles of ALARA (As Low as Reasonably Allowable) whilst maintaining the diagnostic quality.

"The production of the x-ray image is based on the balance between the amount of radiation produced over time, and the degree of penetration required to effectively pass through the tissue and bone", explains Paul.

It is known that an increase in penetration reduces the amounts of radiation required, but has also an effect on the diagnostic quality of the x-ray image.

"With the advent of digital imaging and post processing enhancements, higher penetration values can be achieved requiring less radiation to produce the x-ray image", says Paul.

With thanks to the Lions Club of Blackburn, this research project will follow a 2017 investigation on the theoretical possibility of reducing patient dose for extremity imaging.

"The aim is to establish the lowest possible threshold in radiation exposure that still maintains the diagnostic quality", says Paul.

"We hope that the findings will lead to significant reductions in x-ray radiation exposure for consumers of medical imaging at Eastern Health and beyond.

"In future we hope to be able to extend the research to include all regions of the anatomy", says Paul.